The is the second of three posts on Bannister v Freemans Plc, written by Michael Rawlinson QC with the assistance of Samuel Cuthbert.

In today’s post, Mike introduces the concept of the “iron triangle” and the relationship between breach of duty, exposure and causation.

The Iron Triangle as a thing and as an analytical tool 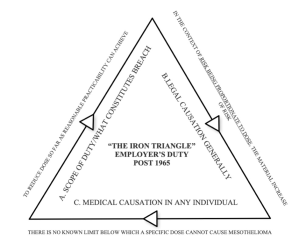 Let me explain what the diagram shows and how it does so. It is, in essence, the refinement of the argument put by Gemma Scott and me to the Court of Appeal in oral submissions in Bussey and put again (in other ways) by Gemma Scott and Harry Steinberg QC in Bannister. The diagram both demonstrates the closed logical loop (to mix my metaphors) trapping the Defendant employer who exposes the victim after 1965 and is intended as a map for how the Court should seek to analyse the issue of de minimis.

Commence with Side A: this demonstrates the applicable law (Jeromson; Maguire)

(a) Suppose all reasonably practicable steps had been taken by an employer but that some exposure to fibres (“y”) was, even then, not avoidable.

(b) The Defendant’s breach lies in the exposure of the victim to (x-y) fibres.

Now consider Side B:

(a) Since the risk of developing mesothelioma is proportionate to the dose received;

(b) And the test for legal causation generally in mesothelioma is the tortious creation of excess risk,

(c) then it follows from our consideration of Side A of the iron triangle, that the employer’s breach lies in creating a risk in the proportion of (x/y).

(a) This deals with individual causation in fact.

(b) Since there is no known lower limit below which asbestos fibres cannot cause mesothelioma then individual causation is proven by simply demonstrating that x is greater than y.

(c) Subject to de minimis below, one does not also need to prove that x is greater than y by any fixed amount: that is the importance of the analysis of the majority in Bussey.

Before going on to consider the issue of de minimis, and harking back to my observation that the Court had not concentrated on the role of breach in the light of D’s concession in this case, the analysis of the iron triangle above immediately makes clear that proof of breach marches in perfect lock-step with proof of legal causation as a matter of logic because risk is proportionate to dose and the proof of causation in mesothelioma claims is the proof of the increase of risk.

(a) Put another way, once it is proven that breach has occurred (ie that there has been a material increase in the dose which could have pertained with the taking of risks: x-y,) then it necessarily follows that causation has been proven to precisely the same degree. Conversely, if there is a failure to show that a material increase in dose has occurred sufficient to found breach, then there is also a necessary failure to show that causation has been proven.

(c) This last point was effectively argued by Harry Steinberg QC in Bannister as can be seen from paragraphs 193-194. It was rejected by the Judge. With respect to the Judge, I agree that where liability is based upon a failure to comply with a ‘yes/no’ statutory duty (such as a failure to keep an asbestos register under the 2002 Regulations) then it does not necessarily follow that an increased risk has been created. However, where I respectfully disagree with the Judge is that where common law principles of negligence are relied upon to prove breach then any finding by the Judge that causation had not, by the same evidence also been proven, cannot easily be justified. That is the effect of the iron triangle.

A principle of de minimis also operates within the iron triangle. That much is a matter of fixed law. But how is it to be identified?

There are only 3 methods by which it could ever be identified:

(a) As the Judge in this case seems to have acknowledged by his citations, high authority does not assist in identifying, as a practicality, what constitutes de minimis. Representative of this lack of assistance is the following passage from Sienkiewicz (cited at [27] of this Judgment) in which Lord Phillips stated:

“108.  I doubt whether it is ever possible to define, in quantitative terms, what for the purposes of the application of any principle of law is de minimis. This must be a question for the judge on the facts of the particular case. In the case of mesothelioma, a stage must be reached at which, even allowing for the possibility that exposure to asbestos can have a cumulative effect, a particular exposure is too insignificant to be taken into account, having regard to the overall exposure that has taken place. The question is whether that is the position in this case”

(c) There is thus no help to be gained there.

De minimis by reference to some objective bright shining line

(a) It was precisely Ds’ collective leap upon the judgment in Williams as warrant for the proposition that a bright shining line existed (in that case exposure to 2 fibre/ml because of the terms of TDN 13) which was unanimously rejected in Bussey. Jackson LJ doubted that that was the meaning of Aikens LJ in Williams in any event but that if it was, then such an assertion was wrong (Bussey [51]). The other two LJJ were even clearer that no such bright line existed. The appropriate questions were set out by Underhill in Bussey [63]

“…In my view the right approach in principle to the necessary inquiry is twofold: (a) the first question is whether Anglia should at any time during Mr Bussey’s employment—that is, between 1965 and 1968 (the precise dates are not known)—have been aware that the exposure to asbestos dust which his work involved gave rise to a significant risk of asbestos-related injury. (I say “significant” only so as to exclude risks which are purely fanciful: any real risk, albeit statistically small, of a fatal illness is significant.) That will depend on how quickly the knowledge, first widely published in 1965, of the fact that much lower exposures than had previously been thought to be dangerous could cause mesothelioma was disseminated among reasonable and prudent employers whose employees had to work with asbestos. One aspect of this question is whether, even though Anglia may have been aware of the risk in general terms, it was reasonable for it at the material time to believe that there was a level of exposure below which there was no significant risk, and that Mr Bussey’s exposure was below that level. (b) If the answer to the first question is that Anglia should have been aware that Mr Bussey’s exposure gave rise to such a risk (including that there was no known safe limit) the second question is whether it took proper precautions to reduce or eliminate that risk.

(b) We should draw several conclusions from this:

(c) When searching for the answer ‘how do we know when (x-y > de minimis) it matters not that the issue under consideration in Williams was a bright shining line in the context of breach of duty (ie what amount of exposure constituted breach of duty) and the focus of the debate in Bannister was a bright shining line in respect of causation. As we have already seen above, since breach and proof of causation (albeit separate issues) are in complete and necessary lockstep, there is no distinction of principle to be drawn between them.

(d) It follows that there can be no call by the Court upon either the presence or absence of an ‘objective’ state of affairs in order to determine whether or not de minimis operates: such a circumstance is not a route out of the iron triangle.

(e) As such, therefore, the first criticism of the Learned Judge’s acceptance of the test for de minimis promulgated by the medic namely,

is that, in disguise, this is another attempt to identify an objective bright shining line – in this case ‘the average patient’. As we shall see later, there are many other reasons why this test must be wrong (principally, it doesn’t work in fact; it ignores genetic disposition and it contravenes the ‘thin’ or ‘crumbling’ skull rule).

De minimis via the internal logic of the iron triangle:

(a) We have already seen that one cannot test whether a tortious dose constitutes a breach by asking whether it constitutes sufficient exposure to amount to proof of causation. This is because (to repeat) the test for causation relies upon the legal foundations that the creation of risk is taken to be proof of causation and the risk is proportionate to the (excess/tortious) dose. Thus it is only to the third arm of the iron triangle, that is medical causation in fact, to which we must turn. And this is a source of bad news for those seeking comfort on behalf of Ds within Bannister. This is because:

(b) It therefore follows that when testing for the purpose of determining whether or not an excess dose constitutes breach (and for that matter as a corollary, proof of causation) the only test that can be applied by way of cross check is ‘is the excess/tortious dose sufficient to be able to cause mesothelioma in a susceptible individual?’ since that is the only other parameter available to the analyst within the iron triangle. Since no medic can yet say that any excess dose is insufficient to cause mesothelioma it would appear that whilst the existence of de minimis is legally well established, as a matter of medical evidence it cannot actually be identified and proven by any D.

(c) This is not as extreme as it sounds. Each arm of the triangle represents either now well established law or trite fact trotted out in case after case. Also look to the reality of exposure: no exposer at the time they expose the victim can know whether or not their dose is the only dose which the victim will ever have or whether, in combination with past or future doses, the index dose was the difference between developing mesothelioma or not. Again, that last proposition is a matter of settled law (per Hale  LJ, Jeromson).

It is for this reason, together with reasons of practicality, that the Appellate Courts have predominantly held that no precise figure for exposure is necessary, still less desirable: it is a matter of impression for the Judge. The error which, respectfully, is identified in the approach of Mr Tattersall QC is not that he failed to appreciate that that was the law (he expressly reminded himself that this was indeed the law at [171]) but rather he sought to answer the impressionistic question of whether the exposure would have been material by reference to a pseudo-objective standard set out by C’s expert, namely what a medic informed about the risks would consider an average patient should worry about. In turn, he sought to determine what such a medic would do by a reference to epidemiology [cf 173-175]. Will turn to that issue in part 3, tomorrow.

This site uses Akismet to reduce spam. Learn how your comment data is processed.